A few absurd things that happened to me last week… 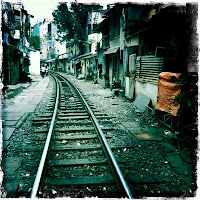 Monday: Very, very nearly got hit by one of those 300-tonne skateboarding rhinos while riding to work. Who could have known that there would be a second tram directly behind the one that had just passed me?!

Tuesday: Had 10 minutes to woof down my lunch and (ideally) read my book while sitting in the car. Spent entire 10 minutes trying to find the page I was up to.

Wednesday: Had a very efficient 15 minutes with my accountant doing my tax return. Just long enough for some fucker in a truck to back into my car in the laneway outside. And drive off!

Wednesday (2): Got the times of my children’s parent-teacher interviews mixed around — hence, managed to miss both of them.

Thursday: Took four little girls to the first ballet class of the semester… (each week I pick up said four girls from school at 3.30pm, change said four little girls into complicated ballet outfits, shove said four girls into ballet studio by 4pm, spend next half an hour trying to sort out whose school uniform was whose)… only to realise that I had forgotten to enrol my own child. She and I went and had a hot chocolate.

Friday: Literally wasted half an hour ransacking the house searching for my favourite coat, only to realise my partner had put it away in the cupboard. Of all places! Sheesh…

Sorry for the silly post... Will try for something more profound next time.
Posted by Rachel Power at 3:00 PM

Hey, I love silly posts, I Just did one about what I found in my fruit bowl!

They travel in threes, I find, these comedies of errors, but yours sounds like it went in fives.

I wonder that you could manage to keep up enough goodwill to be able to write about it at the end of such a week.

Well done. You just got several months' worth of bad luck out of the way.

Not silly at all. Just life stuff.

Ha ha, you're all very sweet. Really, if life didn't get any worse than that, I'm doing OK, aren't I? No-one died, after all.

Precisely, Rachel. I had three completely ridiculous and annoying things happen today, too, it must be the season!!
Sorry about your car, though - hope it's not too costly.

What's not profound about everyday life, dear rachel? Poor darling, what a week! (altho I must say I laughed...not at your expense of course!) jxx

I love this post too! It made me laugh! I am often surprised to find things hidden in the cupboard where they belong!!!I'm impressed you only wasted half an hour -you must be pretty organised! I'm still making those mad dashes for my 18 year old who has not yet got her licence and perth public transport is not all that effective!

Yes, half an hour doesn't sound too bad, I know. But when it's making you yet another half an hour late for work it's a tad ridiculous. Never ceases to amaze me the way mornings just disappear!