Victoria's bushfires and our Bev 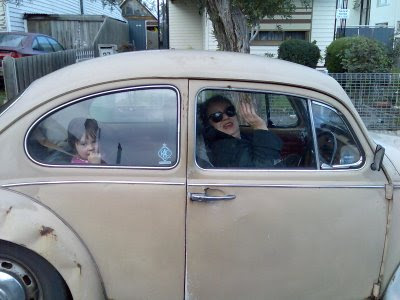 We have a wonderful babysitter we call our "gravelly old groover". There is no-one else like Bev (that's her in the VW with my Freya in the back). She has a colourful past, having run Carlton restaurants and partied with rock stars in her youth--she even came up with the riff for a big hit, though she never staked her claimed to royalties. She is one groovy granny.

In all the years she has worked for us I have never once heard her raise her voice. She is seemingly unflappable. Bev is not one of those babysitters who turns up with her magazines and hopes the kids will mind themselves. She comes complete with a new stack of library books and activities and stickers and all the paraphernalia she has gathered, tailored to their interests, and from the minute she walks in the door she is completely dedicated to the kids.

Four other mothers and I take turns each week to host our 'playgroup', which means Bev and one mum mind the kids while the others have a break or work or do whatever needs doing. It's a great system--and a lovely chance for a chat with the precious gravelly one. This week was my turn, and of course Bev and I wound up discussing the bushfires--the trauma and sadness and our fears for the future in this harshening climate. 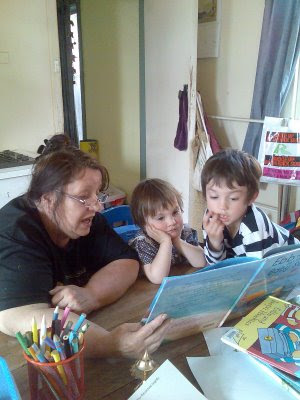 "I have been worried about these things for years, Rachel," she said to me. "Since the seventies I have been terrified about what the future holds for these kids." Bev only had one child--and for the first time I discovered that this choice was made because of her concerns about the world she was bringing him into. But now she has grandchildren, of course, and that has only brought it all up again.

She told me that this was the reason she decided to become a childcare worker--because she wanted to dedicate herself to giving as many children as she can the most magical possible childhoods, because they will need to carry that sense of joy with them into the future and "the horrors" they will be confronting. She had never told me this before. I walked into the kitchen and shed a few tears, and then I made us both a cup of tea and helped the kids into their fairy costumes. I will never be able to explain to Bev how grateful I am that our kids are among those lucky enough to be in her orbit, sharing in some of that joy she so passionately bestows.

Check out Our Community for ways you can contribute to the bushfire relief cause. Watching the community rally in support of the bushfire victims has made this not only a terrible but also a moving and heartwarming week, hasn't it?
Posted by Rachel Power at 10:19 PM

This story really touched me, Rachel. It is something that I think about often too. It sounds like you, and your children, are very lucky to have Bev in your lives - what a generous person.

Gee sus. You gotta tell her you think she's dynamite. When's her birthday? You have to make cards and a cake and get some rockin' music on and have "let's celebrate Bev dance".

Oh, we definitely splash out on Bev's birthday and at Christmas and all of that. But that doesn't feel enough. I love the Bev dance idea--she'd get a serious kick out of that!

precious bev - u are so lucky to have her.i have had a fantasy about that kind of playgroup - great to hear it works. best wishes for your journey to meet those kids - will be heartwrenching i'm sure. b

Hi Rachel, I started your book last night and am thoroughly absorbed. Have a long weekend ahead of me so I'll be able to devour it whole, and I'll post a review on my blog. So pleased to have found it!

Kerry, I feel so chuffed that you ordered it to travel all that way. I hope it's worth it. I always feel the need to tell very new mothers and soon-to-be mums to read the conclusion as well as the intro, which I worry makes things sound a bit grim. Anyway, I'd love to hear form you when you've finished it...

Everything I'd been hoping for, and I imagine I'll go back and visit again. http://picklemethis.blogspot.com/2009/02/divided-heart-art-and-motherhood-by.html