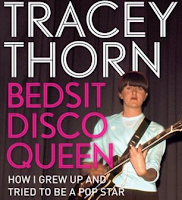 A few years ago, I read an interview with musician Tracey Thorn (Everything But the Girl, Massive Attack) where she spoke about giving music away altogether after having her three children.

Thorn and her partner, bandmate Ben Watt, had taken the kids with them on tour — and then decided that they were never doing that again!

"That tour was just weird," Thorn said. "I was putting the kids to bed at the hotel then racing off to soundcheck and I remember thinking, I don't like doing both. I feel like I'm being rubbish at both. So I took a unilateral decision to stop."

Watt agreed: "To be honest, it was never easy. When you throw kids and family into it something has to give. You can't keep all that going at the same time. You'd go mad."

For several years, Thorn was a full-time parent, not even jotting down lyrics in her notebook. But she did keep a journal about her life, which she described as "just a list of events of marginal interest" that would never see the light of day.

Well, I hope some of those thoughts have crept onto the pages of her new memoir, Bedsit Disco Queen: How I Grew Up and Tried to Be a Pop Star, because sometimes those so-called "marginal interest" notes are exactly the kind of things others want and need to hear! And knowing Thorn's lyrics, I suspect they're far from boring.

If you're reading this blog, then the interview with Tracey Thorn on Radio National's Books and Arts Daily yesterday is essential listening.
Posted by Rachel Power at 11:31 AM

Yes, I also hope that some of those notes have made it into the book. I'm at the point where I'm seriously considering giving up the idea of continuing with writing/editing as my work for at least five years. It's just impossible with a toddler, especially for the dwindling pay (or none at all when it comes to writing) and the demands on my time and the need for obsessive-level focus.

I can't break through and I can't manage my life with a small child and a household on top of it all. I've worked for the last seven weeks and the house has descended into shit and I'm giving my son about 50%. I'll still write -- but I'm not going to even try and get it out in the world for the time being.