The artist I met in Venice

Since writing The Divided Heart, I’ve been surprised (in a very low-key way) that no-one’s ever asked me who is the male European artist I mention in the conclusion to the book. So obviously you’re not all dying to know — but I’m going to tell you anyway, because he is such an important artist for all sorts of other reasons.

When I was 21 I did the backpacking through Europe thing that us Australians do, and while in Venice, my travelling companions and I decided to take a ferry to the island of Giudecca.

There, in a restaurant, we happened to meet New Zealand painter Thomas Lauterbach and Austrian artist and architect Friedensreich Hundertwasser (1928-2000), who’s work you probably recognise, even if you do not know his name. (They helped us to order after catching us struggling to communicate with our Italian waiter.) He is probably most famous for his incredible block of flats in Vienna, known as Hundertwasserhaus.

Here is not the place to write about this encounter in any detail, but it meant my friends and I had the great privilege not only of meeting this phenomenal person but also of visiting Venice’s largest private garden, which Hundertwasser then owned. He took us on a walk amid antique statues, along trellised walkways and veiled nooks, to arrive at an old Istrian stone water gate overlooking the Venetian lagoon.

Once a tame English garden, Hundertwasser had let it run free, its knotted undergrowth a wild mass of nettles and brambles, a site for his ecological experiments, including humus toilets. I have since discovered that Hundertwasser’s decision to let the garden become overgrown was controversial, as you can read here if interested.

The garden has a fascinating history — apparently a place that countless writers (Maeterlinck, Proust, Rilke, James) visited and where ‘Alexandra of Greece’ (otherwise known as the Queen of Yugoslavia) famously went mad. The giardino edino, as the estate is known in Venice, was also the location of a famous quarrel between an unknown American and a young school friend of Cocteau called Raymond Laurent, which climaxed with Laurent committing suicide on the steps of the Salute church.

Hundertwasser, as I mentioned in The Divided Heart, treated his whole life as an artistic project. As an environmentalist he was visionary. Central to his work was his rebellion against “the tyranny of the straight line”, which he saw as inorganic, sterile and Godless. He believed in making the world a more beautiful place, and his architectural designs included rooftop gardens and bottle houses and flush-less toilets.

He spent much of his later life living in New Zealand, on a rural property in the Bay of Islands, where he fought hard for the right to be buried in his garden of the Happy Dead, under a tulip tree. 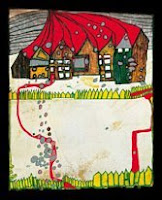 There is so much I could say about Hundertwasser — more than I can fit into a short post here — but I was and continue to be full of admiration for his determination to use the universal language of art to make political statements, whether it be for peace, ecology, against nuclear power, or for buildings befitting humanity and nature. He was an environmentalist well before such a thing as the environment movement existed.

I think Hundertwasser is constantly underestimated — mostly, it seems, because he was considered an exhibitionist and blatant self-promoter. (He was a nudist for a time a la Lennon, in the name of peace.)

But I, personally, feel blessed to have met him.
Posted by Rachel Power at 10:06 PM 15 comments:

The ethics of writing about those we love

I have found myself having a lot of discussions with people of late about the ethical problems of writing about our families — those thorny issues of boundaries and consent.

Writers, particularly, rarely avoid writing about the people they are intimate with. So, do we have a responsibility to ask our subjects’ permission to publish material about them, even if fictionalised?

And can’t we just be satisfied with writing something down? Why do we need to go and publish the stuff?

Can there really ever be an ethical code of practice for artists?

Gabrielle Carey made the interesting comment about her latest book, Waiting Room: A Memoir — that she kept it in her bottom drawer for several years before publishing it. Sometimes it’s just a matter of timing.

I do my best to write now, think later. If I think too much about what so-and-so will feel, I’d never write anything at all. But I do find myself regularly minimising the document on my computer when my partner walks into the room.

I have sometimes worried about what my kids will think of The Divided Heart, should they ever read it. I hope they see it as a record of how much I love them, as much as anything else. But there’s a risk they’ll have a very different view, and I have to live with that.

My seven-year-old son is very aware of the book and recently drew a picture of me with a bubble from my mouth saying: “The Devided Heart” and then an arrow to a drawing of a book, with “Mama’s book” written above it. I felt kind of wretched that he was celebrating my book without being old enough to really grasp its theme.

Fellow blogger Elisabeth has a fascinating discussion of the 'writing about family' theme on her blog, Sixth in Line, and notes that it is closely related to that other big area of literary controversy: the fact vs fiction debate.

You may all have heard about the furore in Britain over Julie Myerson’s book about her 15-year-old son's drug addiction, which led her to throw him out of the house. You can watch a painfully squirmy BBC interview with her here, in which Myerson mostly works to justify her decision to publish the book — only really digging herself in further.

Gabrielle Carey made an interesting comment in response, that instead of Myerson trying to justify her decision on other grounds, why can't she just say "I write — and that’s what I do?”
Posted by Rachel Power at 11:19 PM 12 comments: