Is there such a thing as women's writing? 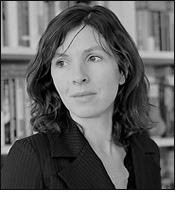 There was the most wonderful article, “A Voice of Her Own”, by Rachel Cusk in yesterday’s Age newspaper about “women’s writing”. It is one of those pieces of writing that makes me want to shout ‘Hurrah!’ because someone has found a way to express things that I have felt in my bones but not managed to describe to myself.

I love Rachel Cusk's work. When I read her novels, I feel like every sentence is teaching me how to write. I discovered her non-fiction book, A Life’s Work: On Becoming a Mother, late in the process of compiling The Divided Heart, and it was a complete revelation to me — full of the kind of brutal honesty she advocates in the article.

At the time, her book stirred up all sorts of controversy and was vocally rejected by certain readers repelled by its rawness, or what they saw as its indulgent self-obsessiveness, just at that moment when a woman is supposed to be giving herself over without reserve. As Cusk says (somewhat obliquely): “She can find herself disowned in the very act of invoking the deepest roots of shared experience.”

I think it will take me at least two more reads of her article to fully comprehend all that she’s getting at (it is refreshingly dense for a newspaper article), but I urge you all to read it. I think it spoke to me particulary now as I have found myself in a strange state lately when it comes to writing. Not merely feeling stuck, but actually silenced, somehow, by the realities of life.

Funnily, this state descended on me following a period where I was writing furiously, and now I find myself having to not resist, but just wait for the emptiness I've been feeling to once again be invaded with words.

What strikes me in Cusk's discussion of women’s historical “silence" is the idea that it may not always have been characterised by conscious frustration, but rather by the dominance of a culture that makes a woman unknowable to herself, that bars a woman from realising herself.

There was a gap in what women were able to imagine and their lack of “wordly power” to enact it, she writes. “Yes, she might produce literature out of this conflict in her being. But she is more likely to produce silence.”

She describes a Doris Lessing story about a mother of four who begins to want a room of her own. She doesn’t know why she wants it or what she wants it for, but the desire for a space where “no one can get at her” becomes an obsession. A designated room in the house doesn’t work: the kids can still find her there. So she regularly starts renting out a room in a hotel.

Cusk’s point is that the woman in the story doesn’t go to this room to write bestselling novels. Or to create anything at all. Perhaps the most powerful “women’s writing”, she is saying, is that which describes its opposite: women’s silence; the experience of someone who does not have the means to articulate the source of her own restlessness to herself.

When I read Cusk’s A Life’s Work, I remember finding it intriguing that she didn’t specifically identify herself as a writer, or suggest that a lack of time for writing might be a central cause of her frustrations as a new mother. At the time I saw it as a kind of oversight, especially coming from someone with such keen self-knowledge.

With this article, though, I see it was possibly deliberate. A way of universalising her experience for the reader, but also trying to get at what is, in actuality, a more general sense of confusion about what it is and means to be a woman feeling the “integrity of her life” suddenly at risk.

For contemporary women, “Marriage, motherhood and domesticity are regarded as so many choices, about which there is a limited entitlement to complain,” she writes in her article. In other words, now that we are equal, superficially at least, we are also successfully disenfranchised. As women, we no longer have a powerful, unified movement to join when we find ourselves thrust into situations that make us realise our lives are, after all, still defined by the fact of being a woman. All the more shocking for modern women who have convinced themselves of their equality, and fiercely protect this belief.

Cusk’s idea that this might be the reason for a writer to “risk taking femaleness and female values as her subject”, could entirely describe my own impetus for writing The Divided Heart.

As she says, it is the work that deals in the eternal — motherhood, domesticity, family life — that the most honesty is needed, and that you can expect the strongest rejection, because so many women don’t want to return to these questions, or admit that their lives might be affected by them, or lose some of what they feel they have gained from effective assimilation.

I have a dear friend (one of five siblings) who tells a story about watching some video footage of her family and suddenly being struck by what their lives have meant for their mother. She turned to her and said, “But Mum, we’ve ruined you!”

Her mother’s answer: “Yes, but what a way to be ruined!”

When it comes to thinking about the "integrity" of my own life, this anecdote often comes to my mind.
Posted by Rachel Power at 6:25 PM 8 comments: