Artist couples and the politics of envy

This week, my family has gone to the beach for a holiday, without me. On the couple of strange, formless days that I have spent at home without them, I have been writing. But I have also been digging out those twisted clumps of mouldy, neglected clothing compressed into the bottom of the washing basket, and hanging load after load of these long-forgotten items on the line.

I know that when my partner is home alone for any length of time without me and the kids, the idea of performing this kind of task wouldn't even enter his head. Instead, he would have focused all his energies on his creative work and come up with the goods, in a far more substantial and satisfying way than I ever seem to achieve.

Last week on Triple R's Aural Text program, Peggy Frew and I had a long chat about a 2003 article, "Envy", written by writer Kathryn Chetkovich.

Chetkovich is the wife of literary superstar Jonathan Franzen, and what starts as an astoundingly honest personal story about professional envy goes on to encompass so much more about the nature of creativity, particularly that desire for a sense of "permission".

She and Franzen (who she only refers to here as "the man") met while they were both struggling early-career writers. Not too long into the relationship, though, she was still struggling, while his efforts had produced an international smash-hit.

She quickly realised that, for her, struggle means battling the external demands and the dilemmas that chip away at her confidence. For Franzen, writing may at times be a struggle, but his sense of conviction remains intact.

When two artists live under the same roof, one of two things is eventually bound to happen: success or children.

After that, a couple often has to draw upon every reserve of generosity in order to keep supporting each other's work and not become bogged down in resentment and competition.

Chetkovich notes in the article that in the time it took Franzen to draft several hundred pages of his novel, she had penned a 15-page story, a short play and part of an "inadequate" screenplay. Under normal circumstances, that wouldn't be such a bad effort, surely. But she was comparing her output to the behemoth that was The Corrections.

When you have fallen for another artist, you are confronted by what Chetkovich calls "its peculiar calling card": the fear of what you want for yourself. And she is extremely honest about the impact of her husband's success -- the proof that the world wanted and needed his work -- on her own creative life, and on their relationship.

She admits that she sometimes withdrew from him emotionally and sexually as a form of revenge; that at times she wanted to drag him down and see him fail. "That if I could not be happy I was ready to make us both miserable."

How to mantain a sense of equality and not be mired in envy when your partner's success only serves to highlight your failure? What does it mean when you are no longer your partner's best and purest champion?

When the British rights to The Corrections are sold, "The part of me that was his girlfriend put her arms around him and told him how happy she was, and the other part, the miserable writer within, kept her distance," Chetkovich writes.

But what Chetkovich also exposes in her remarkable article is those differences that persist between male and female writers: the inner conviction men seem to possess about their right to create; the way women are held back by their desire to be attractive and likeable; how easily they are drawn into a life dominated by caring and servitude; the ever-present fear that writing is an unnatural occupation for a woman, and that unless her work is doing good in the world, it is mere self-indulgence.

All these elements generally make women's hold on their creative convictions far more tenuous than that of their male counterparts. Franzen's previous wife gave up writing when their marriage broke up; but if she had found success first, Chetkovich feels sure that Franzen would have kept writing with the same robust resolve he had always possessed.

"What I envied were what his talent and success had bestowed on him, a sense of the rightness of what he was doing," she writes. "I wanted what women always want: permission."
Posted by Rachel Power at 1:52 PM 10 comments: 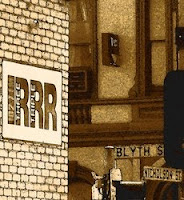 Peggy Frew and I are having a turn in the hot seat at Melbourne's Triple R studios for a couple of weeks, co-hosting literary program Aural Text, usually hosted by Alicia Sometimes and Lorin Clarke.

Today we will be chatting to music critic Michael Dwyer and feminist writer Monica Dux, among others.

We will also be playing some spoken word and tunes with great lyrics. 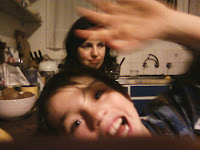 I’ve been forced to realise something about myself over the years — partly a fault of personality, partly a result of experience, especially the experience of motherhood: I am really bad at withdrawing from the hub of the action.

I should have understood this about myself long ago, being a kid who always did my homework on the loungeroom floor, wrote her uni essays at the kitchen table, then became a journalist who relished working amidst the noise and chaos of a bustling newsroom. Ever since those earliest working days spent seated next to the crime reporter, with his bloody wireless tuned in to the police CB all day, I have never been able to work in complete silence.

As a mother, though, this tendency seems to have has found its full expression. Anyone who has read The Divided Heart knows that I have found it exquisitely difficult to withdraw — physically and psychologically — from my family in order to focus on my own solitary work. And, whatever else it is, writing a book is usually a long and necessarily isolated slog.

I have never set up very effective boundaries between me and my kids, who know just how easily they can exploit my tendency to become easily distracted by their demands. It doesn’t help that I am a very slow writer, and one who easily loses confidence.

Where duty and distraction end and procrastination begins, I don't exactly know, but turning from my children, shutting myself away to write, never seems to get any easier. And when you're caught between a difficult sentence and a pile of dishes, a bit of hearty scrubbing can suddenly look so satisfyingly achieveable.

Admittedly, I have never really set up effective boundaries between me and the rest of the world either. Mothers and writers do have one thing in common. They are both constantly called upon to do things out of the goodness of their hearts. We endlessly volunteer our time to causes that, no matter how worthy or interesting, don’t pay, and don’t help us to remain focussed on the things we want and need to do for ourselves.

No matter how fast, or self-assured, any writer is, at the end of the day the words have to be put down on paper. And that requires focus. If I learned anything from writing The Divided Heart, it’s that there is no substitute for discipline — and this is probably truer for mothers than anyone.

Anyone who wants to join me in Saying No this year, jump on board and I will take it upon myself to keep reminding you of your pledge. Happy New Year!
Posted by Rachel Power at 10:51 PM 10 comments: