In the spirit of full disclosure: why money matters when it comes to art 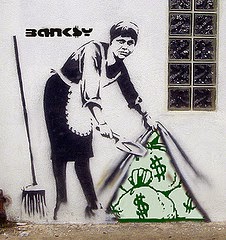 I have always enjoyed the company of people who are willing to be candid. Perhaps because candidness tends to require other traits that I admire: self-reflection, generosity, self-deprecation, openness…

Admittedly, I am a journalist and so I rely on people’s willingness to be honest and articulate about their feelings or experiences. But in my personal life, too, there’s nothing I like more than conversations had in the spirit of full disclosure.

I don’t mean that I want to know everyone’s secrets. Privacy is important, too – and relationships would be way too intense without it! But one of the things I’ve come to understand over the years is that there is a big difference between that which is profoundly personal and that which is actually private.

The Divided Heart relied on women’s willingness to be (at times searingly) honest about their experience of mothering, without requiring them to tell me anything specific about their children or their partners. That said, it still meant talking about the circumstances of their lives. In a book which is all about dismantling the romantic myths of the artistic life, it would be naïve and, essentially, dishonest, not to be frank about the context in which we live and work.

This is in part why, of all the actors I could have approached, I chose to interview Rachel Griffiths – because she is so refreshingly upfront about the role that earning big money and having a stay-at-home husband has played in her ability to pursue her acting career as a mother. And about the downsides of that. When asked about her decision to move back to Australia recently, Rachel admitted: “I had really not seen my children enough, I’d outsourced a lot of that child stuff in order to do 70 to 80 hour weeks on set and I just wanted my kids to actually like me.”

Some of my interviewees were more relaxed than others about this line of questioning, especially when it came to the matter of money. But on the whole they were extraordinarily generous about discussing the kinds of support that enable their creative work.

Yes, people can overcome all manner of obstacles, and do make all manner of sacrifices, in order to make art. And some have more robust practices, not to mention egos, than others.

No amount of advantage can trump talent. But talent is only one tiny piece of a puzzle that is largely made up of practice and perseverance. It can be pretty difficult to make anything of your talent without the time and freedom to develop – and, at the end of the day, money buys time. For most of us, that means support (moral, emotional, financial) is crucial.

The conditions of our life can make all the difference when it comes to creativity – if not in our basic capacity to create, then almost always in our level of output. As someone who has been interested in the lives of women artists over the centuries, this has been patently clear to me.

In a more contemporary context, though, it has to be said that partners have often replaced patrons as the “sponsor” of many artists. And I, for one, am grateful when an artist is willing to admit that having a partner who brings in a sizeable income – and is happy to provide that support – is what allows them to focus on writing (or painting or composing…), as writer Ann Bauer does in her recent Salon article, '"Sponsored" by my husband: Why it’s a problem that writers never talk about where their money comes from'.

What this satisfies for me I’m not entirely sure. Perhaps, as a mother who also works full time, it makes me feel more justified (or less guilty) in doing so little creative work! Perhaps it just highlights the important ongoing problem of making any kind of living in the arts without support. Or perhaps it’s just refreshing when people recognise and admit to their good fortune. Then the rest of us can express our envy openly and generously!

Whatever it is, I appreciate it in the spirit of candidness, disclosure and good old-fashioned honesty.
Posted by Rachel Power at 1:34 PM 2 comments:

I have contributed a few works to a group exhibition, Intersection: The Art of Motherhood, which opens this Wednesday January 14, 6-8pm at Red Gallery, 157 St Georges Rd, North Fitzroy. 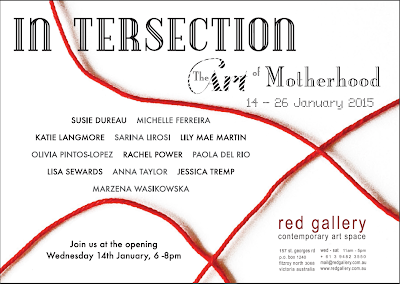 The works run the full gamut of emotions that motherhood engenders, as I write in the catalogue essay:

As new mothers, we confront the sudden loss of boundaries; our minds and bodies tested beyond all previous limits of patience and endurance. As our children grow, we are challenged by our inability to control the world they move through; to embrace the extreme vulnerability and uncertainty that comes with loving another person so much.

The universal themes of mothering – the guilt and ambivalence, the power of maternal love, the challenge of letting go – are all explored in "Intersection: The Art of Motherhood". These works describe the newfound connection between past and present; the renewed chance to see the world through a child’s eyes; and a love so intense that it can only be represented by the vastness of sea and sky.

So if you're in Melbourne and feel like taking in some art and a free drink while lots of kids run around your legs (always a crazy combination!), then please come along on Wednesday night. Or pop in whenever you get a chance.

Posted by Rachel Power at 4:38 PM No comments: