On synchronicity and my man turning 40... 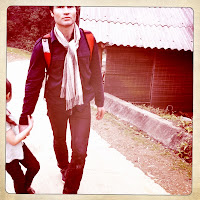 When I was 22, my friend Katie and I saw a terrace house to rent in North Fitzroy, across the road from Edinburgh Gardens. It was the stuff of our dreams.

We were determined and strategic -- rather than wait for the inspection date, we decided to knock on the door and attempt to ingratiate ourselves with whoever was inside.

As we approached the front door, dressed to impress in our cobbled-together faux office-worker outfits (I seem to recall that I was wearing a white suit of all things!), we caught sight of someone familiar sitting on the internal stairs of the adjoining terrace. He was leaning against the wall, talking on the phone with his feet up on the banister. 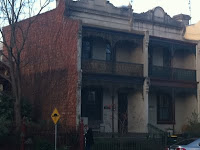 I had met him once before, a few years earlier, at the Uni Bar in Canberra, where we had both grown up. At the time I had decided he was an arrogant prick and had been harbouring a rather too intent dislike for him ever since. Funny how strong feelings sometimes have to go one or the other.

The tenant set to move out of the house Katie and I wanted to rent happened to be playwright Hannie Rayson. As a VCA graduate, she took pity on two entirely transparent young art students searching for a house to rent and recommended us to the landlord.

The rest, shall we say, is history... 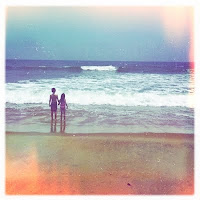 (Left: The kids I ended up having with that not so arrogant after all and in fact rather delicious man living next door.)

Yesterday that man on the staircase turned 40, and I was privileged to wake up next to him for the I-don't-know-how-many-hundreth time.

Not a bad way to spend a life.

(And many years later, just to come full circle, the darling Hannie Rayson launched The Divided Heart. If only I had a recording of her incredible speech! Does anyone remember it? I was too nervous to really take it in but I do remember that she was brilliant and hilarious.)
Posted by Rachel Power at 2:39 PM 6 comments:

This ludicrous article from Bob Ellis is barely worthy of comment, really. Except I, along with hundred of others, can’t help myself.

Clearly The Drum saw it as an easy means of courting controversy and therefore traffic to its site. And on that front it worked, inspiring a huge reaction.

Ellis has created his own unique conspiracy theory that “sexual complaint” is “being used to bring down left-leaning and Liberal-reformist artists and politicians”.

According to Ellis, so-called “wowser-feminism” has gone too far in its agenda to kill off the Left — the “Strauss-Kahn Moment” being the final straw.

Note: “left-leaning” is a very broad category in Ellis's book. It seems all artists and politicians cut down by scheming women conveniently morph in to "left-leaning" types once aligned against a common enemy: the wowser-feminist.

I mean, what has the world come to? When did it become legit for women to ruin the blokey fun of Ellis and his mates?

After all, it wasn't that long ago that you were allowed to come on to your secretary at the office Christmas party and it was all a bit of a lark. Hell, in some countries it’s still the done thing to “deflower” the 12-year-olds in your village.

And paedophilia is only a bit worse than schoolyard bullying, isn't it? Playwrights and filmmakers have raped the youngsters in their acting troupe for centuries. It was all in the name of Art, for god’s sake.

Ellis seems to be suggesting that sexually predatory behaviour is just a by-product of creative genius or political brilliance. That we should ignore the crimes of important figures if outweighed by their cultural contribution.

This article is absurd on so many levels. It's all very well to say that some matters are private issues that should not bring into question someone’s ability to do their job; another thing altogether to say we should avoid making people accountable for their blatant abuse of power, breach of responsibilities or, indeed, criminal acts because it may put at risk their future masterpieces or capacity to solve Greece's economic woes.

Yes, there are times when the public, or media, reaction outweighs the misdemeanour in question (the downfall of Labor minister David Campbell after his car was spotted outside a gay resort being a case in point). But, sorry, when did feminists have anything to do with that?! What of the genuinely scary problem of governments increasingly under pressure from the Christian right?

To chuck a series of complex and sometimes severe events in to one bag for the sake of a "neat" argument is not only stupid and offensive, but also undermines any serious (and more interesting) conversation we could have on the subject of private morality versus public good, or on the legislation of behaviour.

No, sorry, my heart does not bleed for an extremely powerful politician who tries to force himself on a woman (and friend of his daughter no less) during an official press interview.

Why, yet again, are women being made responsible for mens' bad behaviour? Are we really meant to believe that for hundreds of years countless famous but hapless blokes have been at the mercy of feminists with an agenda to orchestrate their downfall, especially if they're of the liberal variety?

As for Polanski, surely his story better illustrates the way rich and powerful men manage to avoid paying for their crimes, rather than the opposite — “35 years of harassment”, “despite his evident genius” — as Ellis sees it.

I don't use the word misonyny often, but this crazy little article smacks of it.

Surely great men of genius can find a way to change the world without sniffing their female colleagues' chairs or raping their underage muses.
Posted by Rachel Power at 12:23 PM 6 comments:

I'm playing catch-up again, so apologies if it's all ho-hum, yeah yeah, she's banging on with yesterday's news again...

But for those who haven't already heard, there was a bit of a scandal in Britain recently when writer VS Naipaul asserted that there is no woman writer he considers his equal – even, or perhaps especially, Jane Austen. Just all too much sentimental "feminine tosh", apparently.

His reasoning: that not being the "complete master of a house" translates to a woman's writing too. Hmm... naturally.

Suddenly Damon's study showing that, when it comes to good writing, it's them beards that make all the difference isn't looking so mad after all, is it?

As part of Naipaul's wild (or should that be pompous) claim, he added: "I read a piece of writing and within a paragraph or two I know whether it is by a woman or not. I think [it is] unequal to me."

He's not meaning to be unkind, though, he says. There there, dears, don't go weeping about it or anything, will you? It's not your fault that a gal's world view is, by nature, so "narrow"...

As a response, the Guardian has created the The Naipaul test: Can you tell an author's sex? -- so while you can't hope to match Naipaul's penetrating insight, you might come to a better understanding of why men do it better...

For those who feel inspired to comment below, only rational responses please, and perhaps share with us which VS Naipaul book has affected you most profoundly. (You can jog your memories here).
Posted by Rachel Power at 2:27 PM 6 comments: