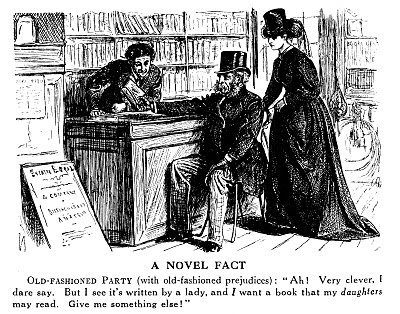 Another article circulating among us thinking women (and men) lately is the Guardian report on a shocking new study showing that leading literary magazines favour reviews written by men about books by men.

Fellow reader/writer Danni -- who calls herself my "newspaper article stalker", which is a very self-deprecating way of saying "one seriously on-the-ball woman feeding me great material" -- sent me this article for blog comment.

It's taken me so long to get round to writing anything that I suggested to Danni that I may as well just post the emails she and I sent back and forth on the issue... So, here we go...

DANNI: I'm sure it comes as no surprise to female writers that males dominate the literary world. This research has given the issue some coverage. All the major outlets in the study say they will make changes but it will be interesting to see who actually does.

Some of the comments are ... I can't even begin to think of a way of describing them without expletives. From the TLS: 'Not too appalled ... authorship is not 50/50...' and this piece of patronising gold: 'And while women are heavy readers, we know they are heavy readers of the kind of fiction that is not likely to be reviewed in the pages of the TLS.' Utter bullshit!

The idiot continues with this lovely morsel: 'The TLS is only interested in getting the best reviews of the most important books.' The not so hidden meaning there that women not only don't write important books but are actually incapable of doing so (and reading them too so it seems!)

The whole tone of the article reeks of a thinly disguised antipathy ... or perhaps I am over-reacting because I am tired, because my son is sick and I was awake all night ... oh no, it wouldn't be that, it must be 'cause I'm on the rag!

RACHEL: I promise I will write something about this ASAP. I am still shell-shocked by juggling my new 4-day working week (UGH! Creative life? What creative life?!) and my youngest's first week at school, so know exactly how you feel.

But the article definitely deserves a response. Apart from the bullshit quotes you mentioned, what I thought was most telling was the last quote, about women perhaps not having the confidence. That, to me, is getting at a real hidden problem.

DANNI: It's the confidence thing and its also a time thing. How much of a lack of confidence can be attributed to lack of time to spend on work? The majority of women just don't have the time, even those without kids seem to be constantly obligated to others (not allowed to be the brooding artist). I think generally there is the confidence in ability but because there is just not concentrated time available so many women think that their work will be inferior ... but I am not sure that that is the case as your book pointed out on so many occasions. Having copious amounts of time does not necessarily equate to quality work (although it would make life a lot easier!).

And beyond all those things, is the pure and simple fact of ingrained institutional discrimination ... not the old-fashioned kind: it's not malicious; it's unconscious. These publications don't have women writers because they don't ask for them. There are plenty of women artists available for consideration, who would be honoured to contribute to these magazines, but no one thinks to commission them.

Anyway enough of this! Got to go do the bloody shopping!

RACHEL: Yes, I completely agree! When I read the mention of confidence, that's exactly where that took me, too: why does no-one ever mention the fact that women have so much less TIME for such things; that they are so obligated elsewhere... which affects everything women are in a position to do? I might just post our convo on my blog. But first, I'll finish emptying the dishwasher...

As you can see, Danni pretty much said it all. But to go on (as I do)... there are all sorts of invisible issues here. Certainly I know for myself that I would love to be reviewing more books, but barely get time to read the things, let alone write about them.

It's entirely plausible that fewer women are putting their hand up for these (let's admit it, usually badly paid) tasks because non-work time is spent doing housework, buying school uniforms, driving little people between football clinics and swimming lessons... Down time, if any, is ideally spent asleep (or, preferably in a bath, if not feeling too guilty about the water-use).

I, sadly, find it almost impossible to justify time spent on activities that are about more elusive, long-term goals, like establishing a name as a writer.

As one insightful commentator put it: "Novels, poems, plays-----labours of love extracted in the hours between near nonstop other jobs."

Perhaps publishers should start sending their books out wrapped in brown paper!

Interestingly, Granta claims it commissions equally between men and women, but still ends up with a bias (featuring 65% male writers).

We know women read and write quality literature. So is it that women writers are still dismissed more readily; or is it that less women are submitting their work to journals because of these other, less tangible barriers, i.e. lack of confidence, lack of time?

Statistics start the conversation, which is good, but the causes can be harder to get at...

And then you get comments like the one we've mentioned above, from the ed of the Times Literary Supplement -- "And while women are heavy readers, we know they are heavy readers of the kind of fiction that is not likely to be reviewed in the pages of the TLS" -- and you realise that sometimes it's just a plain old case of overt sexism, alive and well.

You can check out the full study, conducted by Vida, US organisation for women in the literary arts, here.
Posted by Rachel Power at 12:38 PM 8 comments: