There are a lot of amazingly creative people out there. Then there is that rare beast who is both a startling talent and who also wants to use that talent to create some real change in the world.

If you know Clare Bowditch like I do, you'll know that when this woman believes in you, she becomes not only your friend but your greatest champion.

Through all the time in which she has been cultivating her own creative career, Clare's determination to see others succeed – to bring her friends along with her – has been an equally mighty, passionate force.

That means that there are times – those times when you feel less than deserving of her persistent faith in your potential – when that can be wee bit confronting. It's not always easy to face up to your deepest desires. But Clare will remain determined to see those around her be the best they can be; to help you find a way to do the things that actually make you happy.

As a long-time friend of Clare's, I've been lucky enough to be among the beneficiaries of her constant encouragement over the years. But with Big Hearted Business, she's now sharing the love far and wide, so everyone can get some of that tough (and oh-so-warm) love in their lives.

Clare really believes that with the right knowledge and support you can “Do What you Love, Make Money, Save the World (even just a little bit)” – and the enormously generous speakers at her BHB Conference offered the practical, living proof of how.

Since that event, I've heard from so many women who've said the conference finally gave them the permission, the confidence and the tools to forge ahead with their creative lives.

If, like me, you were there, you probably can't wait to re-live it and finally get down all those pearls of wisdom you wish you'd written down at the time!

And if you weren't among the lucky few to win a golden ticket, Big Hearted Business has launched its BHB Virtual Conference 2013, so that you can watch all the best bits anyway. 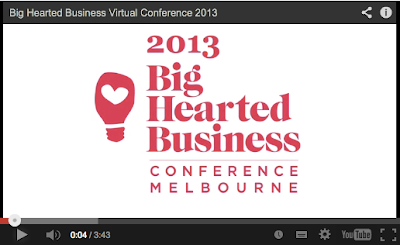 This virtual version is a "super-highlights treasure-chest" of the finest moments from the BHB Conference 2013. It includes talking videos, downloadable audios and transcripts of most of the keynotes, stories, question-times and exercises.

And most importantly, thanks to Catherine Deveny, you'll learn how to develop serious “F*ck off Status” – some of the best advice you could get on putting fears and doubts in their place and getting on with the creative dream!
Posted by Rachel Power at 12:06 PM 3 comments:

Motherhood, time and the art of surrender

For my birthday this year, my partner gave me the most thoughtful possible gift: a week at Varuna, the writers' centre in the Blue Mountains.

I have been to Varuna several times now, and each time induces a different emotional response -- sadly, often characterised by an existential crisis on the first or second day that finds me wandering the streets of Katoomba in a state of panic about my neglected creative "practice".

Between full-time work and my family's needs, my life feels almost entirely controlled by external demands, so time at Varuna is usually the first chance I've had to stop and really think for months. This time, after a particularly busy period at work, I also seemed to have completely lost the ability to structure my own time and felt completely at sea!

Of course once you finally get your bearings, you realise it's already Wednesday and what felt like a luxurious surfeit of time stretching out in front of you suddenly seems to be spiralling rapidly toward the inevitable end date. But a luxury it still is. A chance to once again glimpse the possibilities, if nothing else. Each time helps me remember that to write is really just to pay attention to what's around you -- so simple, but so easily lost in the chaos of "normal" life.

Angst-ridden moments aside, each time I'm at Varuna there are also lovely instances of synchronicity. Years ago, I was doing a residency alongside poet Kylie Rose, who left a book outside my door: Object Lessons by Eavan Boland. It was the perfect thing at the perfect time. Boland provides such an acute description of the new relationship with the sensory world (and therefore, peculiar form of creative power) that comes with mothering that she almost single-handedly inspired the conclusion to the book I was working on, which became The Divided Heart.

This time, writer Jane Messer just happened to mention a Griffith Review essay, "The Play of Days", written by Julienne van Loon, a novelist who was at Varuna at the same time as Kylie Rose and myself all those years ago. At the time, she had recently won the won the Australian/Vogel Award for her first book, Road Story.

I recall discussions with Julienne and the other residents about the feared threats motherhood might pose to a successful writing life. So it was doubly fascinating for me to not only discover that she had had a baby but that her experience had been characterised by such blissful surrender to her son's agenda-free pace, amid all the risks that that state poses to our "selfhood", which she describe so beautifully in her essay:

I have taken twelve months leave from my usual work to be home with a new baby, and one of the biggest adjustments I had had to make is to arrive at a new understanding of time, one measured only by the fragile, mutable pattern of basic human needs: sleep, food, warmth, contact. ... And it doesn't matter. Unless you can't shake the itch for something more meaningful to do.