Launching Karen Andrew's book, Crying in the Car: Reflections on Life and Motherhood 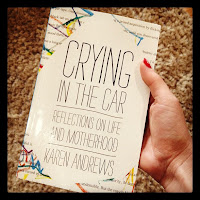 I am launching Karen Andrew's new book, Crying in the Car:  Reflections on Life and Motherhood, at the Eltham Library this Saturday, December 1, at 3pm.

You may already know Karen's lovely writing through her award-winning blog, Miscellaneous Mum, where she writes about her family and her love of books and writing.

Karen is one of those amazing women who just gets stuff done! I didn't even know she wrote poetry -- and now suddenly here's this wonderful collection of her best essays, blog posts, short stories and poems, all of which explore the inherent contradictions in being alive in this world and at this time.

But more of that on Saturday...

You can read one of her stories at Parenting Express, here.

For more details, you can see the Facebook event for the book launch here.

And if you can't make it, you can order Karen's book here, or buy it in a good old-fashioned bookshop.

Hope to see some of you there...
Posted by Rachel Power at 10:18 PM No comments:

Fragility and wonder: the music of Emma Tonkin

When I was writing The Divided Heart, I was always conscious that one of the most modest and talented artist-mothers in my midst was living right next door.

When I suggested to singer-songwriter Emma Tonkin that I should include her in my book, she scoffed and said something about not having a proper creative practice. And yet in her own discrete way, Emma never lets go of that delicate creative thread, even if sometimes she feels that she's only hanging on by a fingernail.

A tinkling piano and Emma's exquisite voice often reach me in the quiet hours when the children are asleep. Alive to the sensuous world around her, if at first you think she writes songs about the "small", listen closer...

What seems intimate becomes epic. Her music lifts you out of the chaos of living and transports you to somewhere defenseless, fragile and immense with wonder. 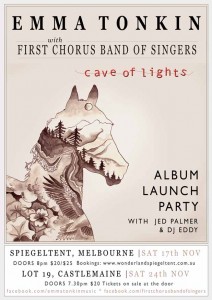 As the Age music writer Michael Dwyer says about her latest album, Cave of Lights: "A fire in the dark. Hope in the storm. Emma Tonkin's new album with the First Chorus Band of Singers is the gloriously redemptive sound of the human spirit alive in a house of skin and bone."

Emma's first album, The Anchor and the Albatross, showcased her unique feeling for melody. Add a swelling four-part harmony to those tunes (as the First Chorus Band of Singers do in Cave of Lights) and the result is nothing short of sublime.

So many creative mothers say to me that they don't really deserve to be called artists because they're not actually managing to juggle mothering and art with any great success. Or that they barely ever produce anything, so they don't deserve to be recognised alongside their more prolific counterparts.

But what makes a "real" artist, anyway? Emma's songs are pretty real, I know that much. And if it takes five or ten years to write a single book or release a single album, so be it. The world is still richer for having that work of art in it. And a life is all the richer for having created it, no matter how slowly.

So if you want to witness something really special, Emma Tonkin and the 25-strong First Chorus Band of Singers, led by Virgina Bott, will be performing at the Wonderland Spiegeltent (Docklands) on Saturday night in Melbourne from 8pm.

I will be there, celebrating what can be achieved in the wee hours and stolen moments -- beyond the laundry and the dirty dishes -- when the world doesn't even realise that you're quietly weaving some magic.
Posted by Rachel Power at 2:48 PM 6 comments: 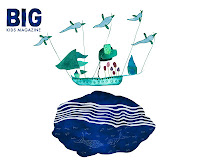 I am on retreat at Varuna The Writers' House this week.

That means I am not meant to be surfing the internet. I am meant to be writing in monastic solitude, churning out the words in a state of wild inspiration with nothing to distract me but my own desperate attempts not to check the word count every ten seconds or eat yet another chocolate biscuit.

Which is why -- in an act of terrible timing on my part -- I have been missing the best possible festival I could have imagined.

But you don't have to miss out. If you are a creative mother of any variety, the Mother-Artist Network Festival is where you should be. Now!
Posted by Rachel Power at 10:40 PM No comments: