Writing, Shoes and Men Who Get It (not the shoes thing) 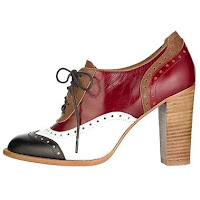 Well, writing might not pay the bills, but at least it can win you a new pair of shoes!

Yep, I dashed off one of those “tell us why in 10 words or less…” things, and next thing I know some shiny Oxford ‘brogues’ land on my doorstep (thank you marie claire).

Just when you thought I couldn’t be so frivolous.

I can’t really afford to follow fashion, so it’s lucky I don’t have time to shop, but I have to admit that I’ve been coveting a pair of this style of shoe ever since I saw them on one of The Sartorialist's subjects (a Sydney woman, in fact — see Friday, May 08, 2009). My partner's not so sure about them — says they're a bit sexy/prim, whatever that means — but who cares. You think he'd be grateful I was getting out my uggies occasionally.

I am a bit of a compulsive viewer of the Sart’s site, partly because it is one of the only fashion forums that doesn’t leave me feeling completely inadequate. It’s full of beautiful people, to be sure, but is also as much about character and style as it is about clothes.

So those of you who write — you may as well try using your skills to win free stuff. I know a writer who has had far better success than me, winning holidays and more (admittedly, her husband’s a marketing manager, which must help a bit.)

But last year I did win a weekend in a hotel in the same kind of comp. And for those of you with small children and minimal childcare options, you know how mind-blowing that was! We had no choice but to palm the kids off for the weekend, catch the tram into the city and rediscover what Melbourne has to offer the footloose and fancy-free nowadays.

Once I’d gotten over the fact that a Hairy Canary gin and tonic now costs more than $10 (is that what happened while I was (not) sleeping?), it was a bizarre thrill to be alone together with nowhere in particular to go and no need to wake up before 7am the next morning. 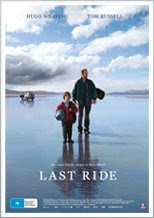 Just quickly on another matter, I recently had the pleasure of interviewing Glendyn Ivin, the director of new Australian film Last Ride, for the AFI website (story should be on the site early next week). His spectacular and devastating film about a fraught father–son relationship opens nationally on 2 July and is well worth the price of a babysitter.

To my surprise, he and his wife (a dancer) had actually read The Divided Heart. We had a chat along those lines and because I couldn’t fit his generous and insightful comments in the AFI article, I’ll put them here:

Yes, it’s very interesting making a film about parenting and about a father trying but failing miserably at being a good parent, and then having those same thoughts on a very different scale at home, in that I haven’t been there, and when I am there I’m in an incredibly distracted or stressed state or freaking out or just thinking about other things other than what I should be thinking about.

I must say I have an incredibly supportive wife and supermum who has just held the fort, so to speak. I can’t speak highly enough of her. If it wasn’t like that, it would’ve made my job much more stressful and hard to deal with. It’s kind of easier, dumbly, for men to say, ‘This is what I’m doing’, and it must be incredibly hard for a woman who’s being a mum because they have a lot of other baggage that comes along with it.

Good on you, Glendyn.
Posted by Rachel Power at 5:56 PM 9 comments: 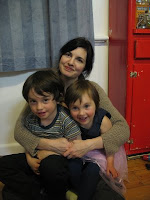 I was on standby last week to speak on Radio National's Life Matters in response to a couple of articles that appeared in the Guardian earlier this year: Rachel Cooke's Dummy Mummies (which was reproduced in the Australian Magazine--you may have noticed it) and Polly Vernon's Why I Don't Want Children.

Unfortunately the producer couldn't get the "key talent" (always nice to know where you stand!) to come to the party, which is a shame, because I had prepared myself for what could have been a really meaty discussion on the children versus no children debate--if such a thing exists, which for these women it clearly does. Both these articles raise loads of questions about what they see as society's current obsession with babies.

I understand that women who do not want to have kids feel that society treats them as abnormal. This word "selfish" gets bandied about--which to me seems as absurd as describing the decision to have babies as a "selfless" one. Of course it's true that once you have kids, your own needs and desires are forced to take a backseat a lot, in fact most, of the time. But to say the urge to have children is a selfless one just seems a ridiculous over-simplification of what is usually more a complex primal and physical urge than a lofty, well thought-out decision to step off centre stage or to give back to society or some such thing.

Similarly, it would be a misguided person who has a baby to make them happy. We all know there are plenty of good reasons not to have kids; all the stats tell us as much. But happiness can have a pretty limited definition, and I suppose a lot of the meaningful things in our lives offer both great joy and big risks and the potential for great despair.

On an issue as big and loaded as having babies, surely we can all respect each others' decisions and be a bit kind to one other? Can't we?

I have to admit, for all the sympathy I have for her frustration, I recoil at the vitriol that Polly, in particular, reserves for modern mothers, as she sees them. In her article, she writes:

I really don't like what parenthood does to grown-ups. This latest generation of parents - oh, it's odd, isn't it? I like the ones I know. Mostly. They're OK, because they're my friends - I chose them, they are by definition better than those parents I don't know. (Even if they aren't - I know for a fact that they were better, once, back before they had children, and I reckon they'll resume something approaching normal service once the buggers have gone to school. Won't they?) But modern parents en masse? That pampering cult of Bugaboo-wielding, Mumsnet-bothering dullness?

Spare me. Spare me the one-track conversations. Spare me the self-righteousness, the sense of entitlement (you, with the toddler-on-wheels: astonishing news just in! You don't have pavement priority over the rest of the world!). Spare me the pretensions of martyrdom and selflessness. (It's my experience that parenthood doesn't make anyone less selfish. Humans simply extend the sphere of their selfishness when they have kids, so that it embraces the kids and dishes out a fierce battering to the rest of the world. Also - no one has a baby out of selflessness. You really want to be selfless? Adopt, lover.)

"...something approaching normal service..." Jeez, I know she's being witty and all, but what a way to think about friendship!

Surely just as bad as thinking that all women who don't have children are selfish, over-ambitious monsters is the assumption that all mothers had a lobotomy in the birthing suite.

Also, isn't it the case--and this is more in response to Cooke's piece--that people who talk of nothing but their kids, and have no way of gauging the interest (or otherwise) of the person they're talking to, is no different to the person who can talk of nothing but their job, with no sensitivity to their audience? In short, boring and insensitive people are boring and insensitive people, aren't they?--no matter what they bang on about; and interesting people are interesting people. Even after they have children! That is my experience, anyway.

I think the issue of childhood and raising children is a fascinating and very significant one, for all of us. We all have to live in this society with other people after all, and all people were once children raised by adults, thinking or otherwise.

Basically, I think it's fucked that a woman can't, in this day and age, choose not to have children without feeling a target for some kind of judgemental attack. But why the need, then, to turn around and pass similarly simplistic, scathing and defensive judgements on those of us who do have kids? I'm all for healthy debate, but I have to admit it also saddens me that women seem to have this infinite capacity for turning on each other.
Posted by Rachel Power at 9:38 PM 8 comments: