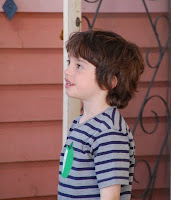 Thank you for those lovely comments on my last post.

I agree with composer Christine McCombe that sweeping statements about art and motherhood are dangerous. I wanted to avoid the term 'artist-mother' in The Divided Heart for this reason, but inevitably it was used just for the sake of convenience. That said, whether or not mothering has a direct impact on the themes of your work, there could be few more life-changing experiences, both in a material and emotional sense--and it is hard to imagine this not affecting your work, or at least your process, in some way.

As Christine writes on her great blog, she feels like she's now embarking on her 'Creative Life, version 2', post-baby. It is such an interesting transition when that often liberating permission to retreat from art/work after becoming a mother slowly gives way to a new creative urgency. "I find that I am approaching things in a different way, partly because of the imperative of time and partly because of a shift in the way I think about what I am doing and why I am doing it," she says. That about sums it up, doesn't it?!

As for the language we use around art and motherhood, it's fraught. I certainly had two women refuse to be in the book because they didn't want to highlight the fact of being a woman in the eyes of the public, let alone being a mother.

More broadly, on that matter of how we talk about mothering to those who aren't parents, I have two old friends who are pregnant for the first time at the moment, and I really have to watch myself--to just take a step back and let them have their own experience without imposing my 'worldy' own. And to just listen to them talk about their expectations without being smug (something I remember hating other mothers do before I had my own babies). It's amazing how hard this can be: to find the right balance between offering advice and not being a know-it-all.

When I was pregnant and ran into parents I knew on the street, they tended to talk in extremes: either telling me it's the most wonderful thing you'll ever do; or prepare for your life to be fucked--no sleep, no time for yourself etc. Now I know that it's both these things--and everything in between--and it probably just depended which day I caught them on as to which feeling was dominating.

Ha ha--just now I've opened to a page in my notebook and found my 7-year-old son has started a list called: "People who are as smart as me." It's a very short list, I can tell you. And my name's certainly not on it. Ah well, I must be doing something right, 'cause he certainly doesn't lack confidence, does he?
Posted by Rachel Power at 10:54 PM 4 comments:

From one mother to another 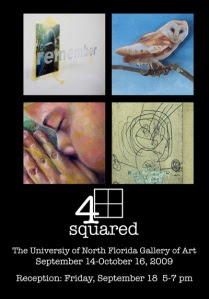 I have had a number of readers contact me almost apologetically to tell me that they initially avoided reading The Divided Heart because they had assumed it would be a negative take on motherhood when they enjoy having kids so much.

Fortunately, they have come to read it anyway — because it was recommended to them, or in one case because she was on the judging panel for one of those many prizes it didn’t get.

So it is lovely when someone gets in touch to say the book defied their expectations. And even more exciting when someone tells me the book inspired them to get moving with their own work, or even fed directly in to their art.

One example is this fab-sounding exhibition at the University of Florida. Four Squared is an exhibition by four artist-mothers and their experiences of making art amongst the chaos of raising young children.

Motherhood is also the theme of their art – “the push & pull of motherhood, domesticity and creativity. It is work created on an emotional rollercoaster, while burning the midnight oil, with the use of favours from friends, with the constant awareness of dishes to be washed.”

Most recently I was contacted by Iranian-born, British-raised, LA-based photographer and mother, Parisa Taghizadeh. She has made a series of works entitled “Mother”, one of which is in an upcoming show in New York, MOTHER/mother at the A.I.R. Gallery in Brooklyn, New York.

MOTHER/mother is an exhibition of work made by artists from around the world within the years immediately following a pregnancy or the birth of a child.

If you are lucky enough to be visiting the US over the coming months, these shows look well worth a visit.

Just the other day, I came across a review of The Divided Heart that ran in the April issue of Art Monthly (check out the great cover!). Reviews by artists always make me nervous, so it was great to read Denise Ferris’s comment that the book made her feel “uplifted”.

“This book normalises the mother and artist combination by presenting women who continue to practise their craft in spite of social or their own confused expectations to choose one role over the other,” she writes.

“These women have continued to make work in spite of difficult personal experiences, and in spite of potent mixed emotions, self-doubt, confusion and exhaustion. To continue to work as an artist is not always as seamless as we hope. And that is the reality presented in this book.”

One criticism, though, was the lack of single mothers and gay parents in the book. Funnily enough, there are both in The Divided Heart. Perhaps it’s an indication of just how universal the issues around art and motherhood are that this wasn’t more obvious.
Posted by Rachel Power at 10:08 AM 5 comments: